Thor: Unkillable Thunder Christ is scheduled to arrive this Wednesday! 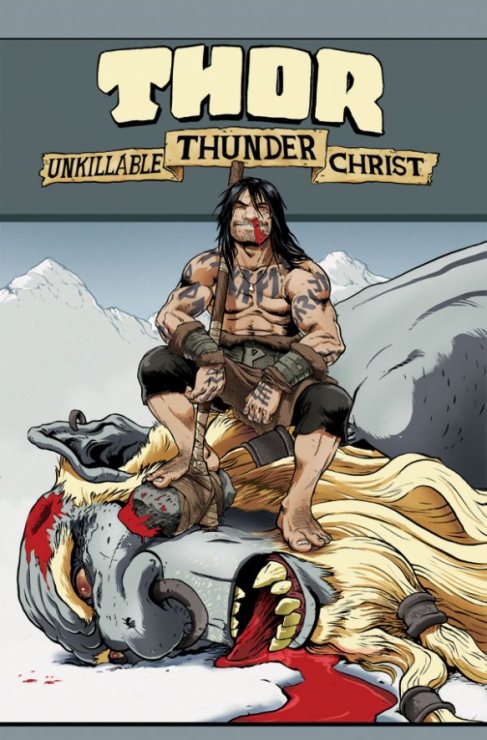 To say that I am excited is to say that the sun is kinda warm. I’m pretty much vibrating with joy.

Blackest Terror, as much as I love it, was written close to four years ago. Thor was written about 1 year ago. It’s a lot closer to where I’m at (both in skill & in personal outlook).

I’m amped as Hell to share it with you fine folks.

Tell your local comic shop that you want a copy.  If they don’t have any on the shelves, have them order you one.  This is the best selling thing I’ve ever done, but it still isn’t selling X-Men numbers, y’know?  Every little bit helps immensely.  Poppa needs a new pair of solid gold shoes.

Speaking of things I’m excited about… 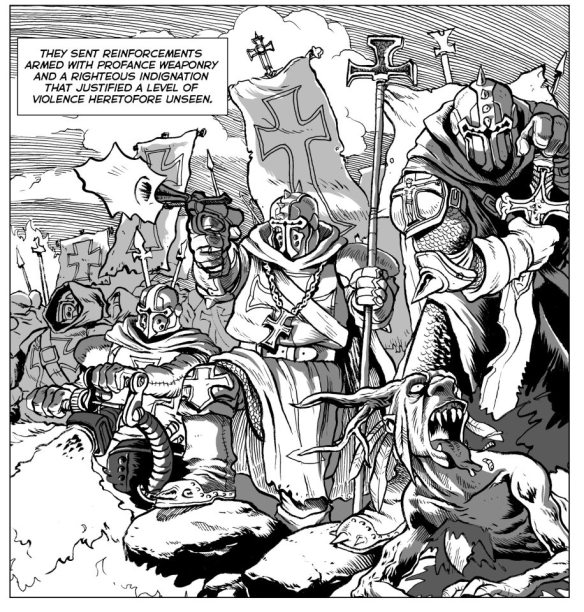 Fubar is notable for being the first Kickstarter-funded project to hit the New York Times Best Seller list. So, that’s cool.

I can’t talk about the theme or anything like that, but the above is an image from it. But I can say…STEAM PUNK CRUSADERS VS. ZOMBIE EARTH ELEMENTALS, Y’ALL.

I don’t have a release date for the book proper, but a sneak preview collection is in the works for the Baltimore Comic Con (September 8-9, 2012), containing the editor’s favorite submissions…which somehow includes Ander’s & mine, and one by Chuck Dixon (Batman, Punisher: War Journal, G.I. Joe)!

And, my Vic Boone story was approved by 215 Ink, too! It’s going to be drawn by Alex Diotto!

Vic Boone is a title that I’m a huge, huge fan of. It’s a pulpy joint about an ex-motorcycle-daredevil-turned-private-eye–and if that premise doesn’t make your naughty bits tingle, then I don’t want to be friends with you anymore.

My story takes place in Paris, has motorcycle stunts, a femme fatale modeled after Pam Grier, and an army of Andy Warhol clones.

Hannah started doin’ daily comic thingies! I appear in them occasionally. Usually consuming Mexican food.  Sometimes as 1/2 of a painting. 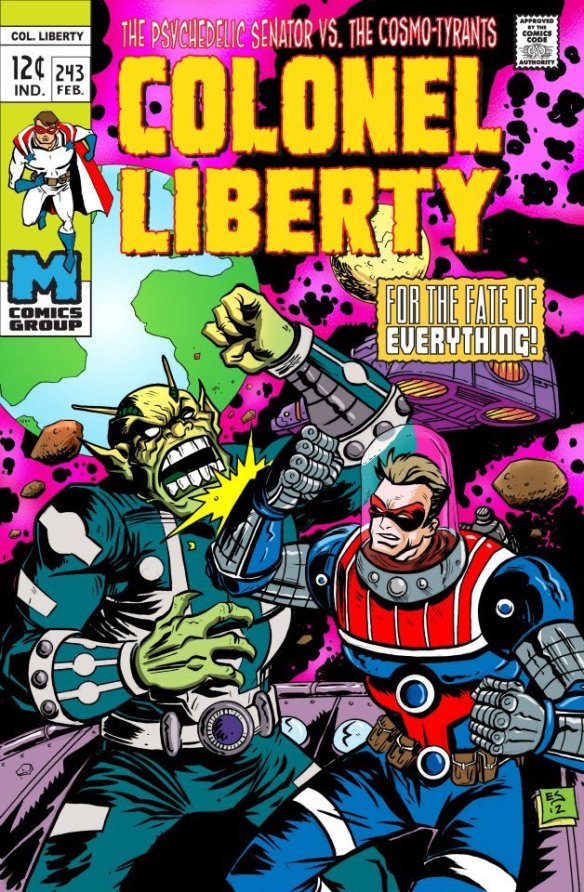 I’ve got a Kickstarter for a film in the works, too. If you’re into that kind of thing, throw some money at it. I’ll love you forever (even more than I do now).

The guys who are doin’ the non-writing part of the flick are damn good. And a bunch of amazing visual artists are involved in creating the alternate reality of the piece.

Life is pretty cool, too.

Hannah & I stayed with my tiny, itty bitty sister: 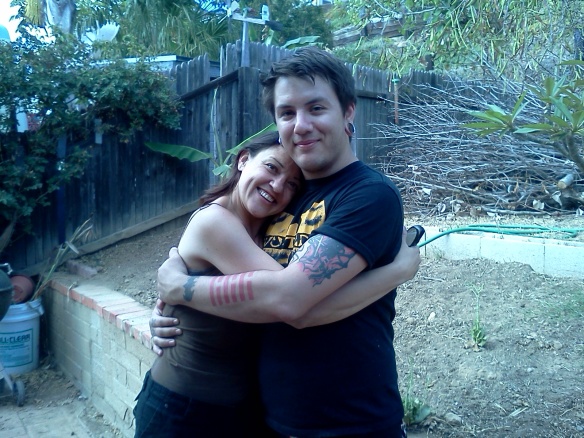 And I bought this Ghostface Killah sculpture: 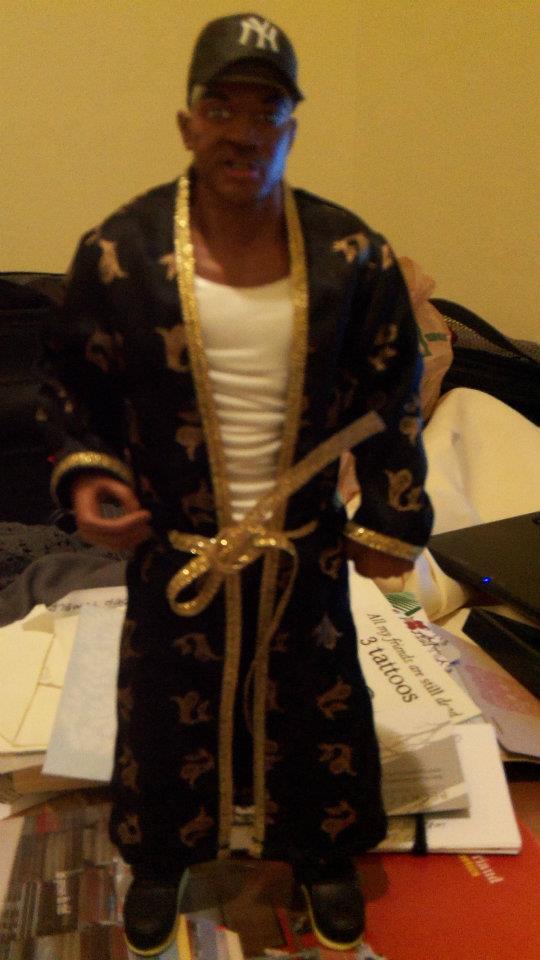 San Diego Comic Con rules.  They give professionals FREE badges, and there’s a rad-ass “pro lounge” upstairs where one can hang out and pour gallons of free coffee and lemonade down one’s throat.

Trickster was amazing, too.  Hannah volunteered, and I swung by every night after con to schmooze.  Mostly with Mahfood and Jane Dope.  They’re good people.

The live art stuff, the store, the daytime networking and the music were all rad.  Super fun.

The only bummer about Trickster is that I feel pretty lonely at bars.  I don’t drink, or smoke, or partake in anything more illicit…so that was a bit weird at times–mostly because the folks who do always feel super judged by me, because I’m sober. And they make it known.  And that’s awkward.

I feel like there’s this romanticized artist persona that a lot of people feel they need to conform to in order to be taken seriously as a creator, and it’s just as dumb as thinking that one needs a pair of Nike shoes to be an athlete or Final Draft 8 to be a writer, or whatever.  It’s all bullshit marketing nonsense.

If there are any kids out there reading this: you don’t have to buy anything to be who you want to be.

Do it if you want, but don’t feel like you have to.  I’m not saying that you can’t drink and be an amazing artist–clearly you can.  There are a billion examples of that.  You just don’t have to.  Don’t feel any pressure.

Everything rules.  Even the things that don’t.