Once upon a time (back in 2011) my good friend Michael Macropoulos (Harvest King, Supersonic Soul Puddin’) and I put together a pitch for Marvel’s “Ultimate Comics” line–an imprint designed to test out new creators in an environment where off-model, left-of-center takes on the Marvel Icons were encouraged.

We pitched Kanye West as The Black Panther.  Because we’re God dang geniuses.

The pitch obviously didn’t result in a green light.  But it did give us the chance to break the ice with a real, live Marvel editor (a woman I continue to bug on a fairly regular basis)–and, even more importantly, it motivated Mike and I to work our butts off and try to get staffed on a book together.

Three years later, it’s finally happening.  You’ll hear more about it–and through the proper channels–soon, but Mike and I are teaming up on a creator-owned superhero comic called “Forgotten Boy”, coming from IDW in May.

To receive regular updates about Forgotten Boy, and to see more behind-the-scenes stuff like this, check this out:  http://www.patreon.com/ericmesquivel

The Ultimate Black Panther is everything conservative America is afraid of: He’s a young, black, Muslim, hyper-intelligent superman with a literal army at his command.

He wears the mantle of King of Wakanda with as much ease as one of his three thousand dollar, designer leather jackets.

Because of his diplomatic immunity, Black Panther gets away with stuff the average superhero only dreams about: He beats the living tar out of Westboro Baptist Church members for protesting hate crime victims’ funerals. He stands guard at Occupy Wallstreet protests to make sure no overzealous cops unsheathe their billy clubs without provocation. He works pro bono, enforcing Rihanna’s restraining order against Chris Brown.

Black Panther
I’m heir to the throne of the greatest kingdom on Earth. My Wakandan ancestors learned to harness the power of the atom while you Europeans were still hiding in caves, naked and terrified of your own shadows. Tell me again why I should acknowledge your authority?

Volume One (“Watch The Throne”) Plot:

King T’Chaka orders that his scientists try to reverse engineer it, in the interest of national defense (“What a marvelous thing, to wage war without a single casualty…on our side anyway”).

The Doombot promptly murders both King T’Chaka, and the current heir to the Black Panther mantle, T’Challa Udaku.

Said Doombot declares itself the rightful ruler of Wakanda (the most technologically advanced nation on Earth), and enslaves its populace, putting them to work creating lethal super-science gizmos and more Doombot soldiers.

Thousands of miles away, M’Baku Udaku (“The Forgotten Son of Wakanda”, T’Challa’s older brother who left Wakanda after T’Challa was granted the role of Black Panther, something he considered his birthright, and subsequently dedicated his life to wasting his inheritance and publicly shaming the family name) gets the news that his entire family is dead via text message, backstage at a Jay-Z concert.

Tony and M’Baku meet up. They drink, they mourn, Tony equips M’Baku with the coolest Black Panther costume we’ve ever seen.

Tony Stark
Just something I’ve been tinkering with. Y’know…in case you ever decided to clean up your act and take your seat at the Adults’ Table.

M’Baku Udaku
I’m touched. Does this mean I shouldn’t sell you drugs anymore?

Tony Stark
Whoa there, partner. Let’s not get crazy. We’re superheroes, not nuns…

M’Baku returns to Wakanda, decked out in his new Black Panther gear. He defeats the Doombot despot and frees Wakanda.

…But then it’s revealed that this was all a Machiavellian power play by king T’Chaka, to bring M’Baku back into the fold.

M’Baku
So this was all some big game to you two? You messed with peoples’ lives..for what? To get me back on the straight and narrow? These are human beings, dad!

M’Baku
Him, I almost understand. But, you too? I thought more of you, brother.

T’Challa
It’s not the Black Panther’s place to question The Will of Wakanda.

M’Baku
Our father—that sad old man—is not the will of Wakanda.

M’Baku storms away. Using social media, he exposes T’Chaka and T’Challa’s ruse to the world.

A S.H.I.E.L.D. Task force (comprised of Nick Fury, Falcon, and Miles Morales) is assigned to M’Baku, to help him oust his brother and father and install democracy in Wakanda. 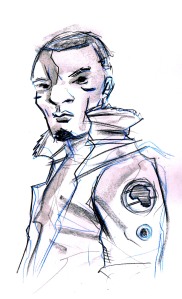 Under M’Baku’s leadership, Wakanda becomes the most powerful nation on Earth—upsetting the political balance of The World, and freaking everyone out.

M’Baku offers citzenship to everyone who has ever felt like an outsider. He offers asylum and funding to notrious supercriminals (like Tyrone Cash and Power Man) “whose only crime is that their ambition exceeded their means”.

An assemblage of North American superheroes (including our blonde, blue-eyed friends, Captain America and Thor) clandestinely meet up with M’Baku and ask him to cool down.

M’Baku takes offense, and a giant battle ensues. S.H.I.E.L.D. gets involved and hauls Captain America and Thor back to The States.

M’Baku hops on the internet and gloats about Wakanda’s autonomy…and in the middle of his brag session a bunch of the supervillains M’Baku granted asylum to storm the palace and attempt to orchestrate a coup d’etat.

S.H.I.E.L.D. sees everything. Nick Fury elects to send Captain America and Thor into Wakanda to help out.

M’Baku welcomes his fellow heroes. They team up and set things straight. M’Baku aplogizes for his hubris and learns a valuable lesson about interdependence.

Nick Fury invites M’Baku to join a secret United-Nations-style collective. He humbly accepts, shows up and discovers that it’s comprised of dudes like Magneto (Genosha), Doctor Doom (Latveria), and Namor (Atlantis)–and realizes that the world at large views him as a supervillain. 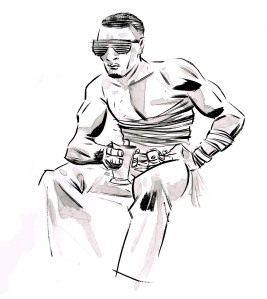 Each issue is a self-contained issue, wherein M’Baku hangs out with one of the despots of the Marvel Universe (Magneto, Doc Doom, Namor), and shadows them as they go about their day—ostensibly, to learn how to rule.

In the fourth issue, it’s revealed that M’Baku has been working for Nick Fury the entire time, stealing valuable information from the other three and quietly establishing resistance movements behind enemy lines.