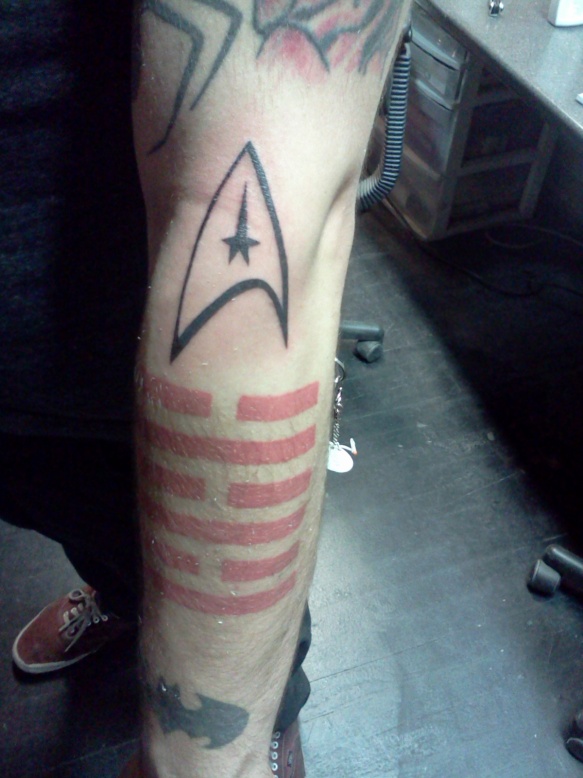 I refuse to be afraid of the future.

That’s why I like Star Trek so much–the core premise of the thing is that eventually, in the not-so-distant future, humanity gets its collective shit together…we figure things out, unite under a common flag, and with a common goal: to be better.  To try harder.

There’s a scene in the 2009 Star Trek, written by Roberto Ocri and Alex Kurtzman and directed by J.J. Abrams, that just kills me:

That line, “You can settle for less, an ordinary life, or do you feel like you were meant for something different, something special?…I dare you to do better”, I can’t shake it.

I’m fully aware of how pretentious, how unabashedly arrogant this sounds, but: I  believe that I was meant for “something different, something special”.

There was a time when I believed this without reason.  I have no formal education, I am “the son and the heir of nothing in particular“, and–I’m not gonna lie to you guys–I’m extremely insecure about both of those facts (you can tell, because I say that I’m not all of the time. PRO TIP: Alcoholics are the only people who talk about sobriety, and the insecure are the only people who manage their own Facebook Fan Pages)…but as I get older, and as I accumulate more and more accomplishments, the more I feel like maybe that gut feeling comes from somewhere real.  Every time I push my life in the direction of becoming who I feel I was meant to be, every time I take a risk (I sold everything I owned to finance the first print run of BLACKEST TERROR, I broke off a two year relationship with a great girl because our domesticity made me less productive, I quit my day gig so that I could be more accommodating to my editors at BOOM!), I’m rewarded for it.

So, with that in mind, I’m taking the biggest risk of my life:  I’m moving to Los Angeles in less than a month.

But what if I don’t?  What if BOOM! keeps giving me work?  What if one of the other L.A.-based publishing companies I’ve pitched to green lights one of the pitches I’ve sent their way?  What if I finally land representation at Circle of Confusion?  What if one of the friends I have who’ve already made the L.A. pilgrimage–someone like Jack Cusamano, Bryan Rountree, Jackson Stewart, Jim Mahfood, Jane Dope, Vince Frederick, Natasha Allegri, and so on–invites me to participate in one of their personal endeavors?  What if I succeed, and that success emboldens a younger version of me out there somewhere to not give up on his/her dreams?  What if I have the potential to be someone else’s Grant Morrison, Dan Harmon, or Gene Roddenberry?

I’ll take that chance.  I’m on my second life anyway–I might as well make it worthwhile.

It goes without saying, but:  I’ll miss Arizona.  There are people in Tucson and in Phoenix who I’d do just about anything for.  I don’t want to call anyone out individually, because I’m sure I’d accidentally omit someone important–but you folks know who you are.

The saddest part of this whole decision is that I won’t be moving in with my San Diegan sister, Kim Niemietz, my favorite human being in the entire world/the only member of my family who I’d be friends with if we weren’t related, with whom I shared a common dream of maybe, someday, actually living in the same city.  Kim, if you’re reading this, I love you to pieces.

“And I think it’s gonna be a long, long time ‘til touch down brings me round again to find I’m not the man they think I am at home
Oh no, no, no, I’m a rocket man”